Be warned that spoilers do appear on this Wiki.
House of Cards has been renewed for a fourth season.
Season 3 premiered on Netflix on February 27, 2015. 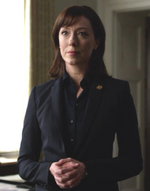 Retrieved from "https://houseofcards.fandom.com/wiki/Main_Page?oldid=13837"
Community content is available under CC-BY-SA unless otherwise noted.